2 weeks in Newcastle at the Lock-Up Cultural Centre 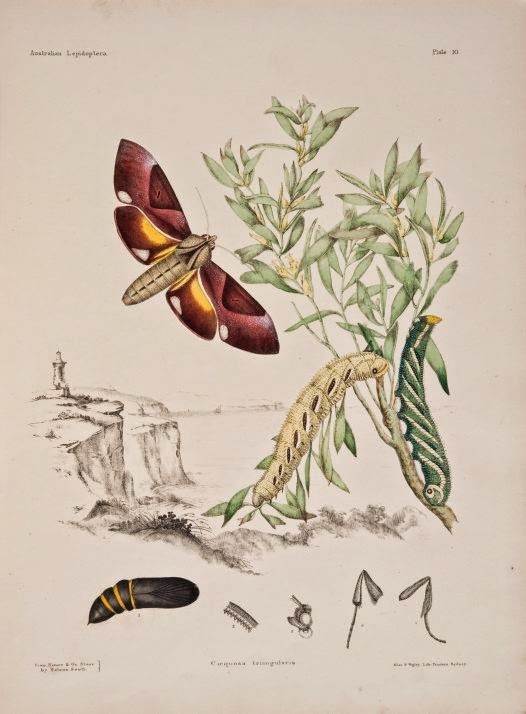 Plate from 'Australian Lepidoptera and their Transformations' by A.W. Scott.
© Australian Museum

For the next two weeks I will be staying in Newcastle at the Lock-Up Cultural Centre. I am involved in an exciting project making work inspired by the Scott sisters.

The project and The Lock-Up's Artist in Residence program is proudly supported by ArtsNSW, The University of Newcastle and the Hunter Street Art School, TAFE.

"The exhibition focus is Kooragang (Ash) Island of the Hunter River, NSW, and the botanical work of two sisters Helena and Harriet Scott who occupied the island between 1846‐1865. These sisters were the daughters of an entomologist and natural scientist Alexander Walker Scott, whom together produced a book titled Australian Lepidoptera and their Transformations / drawn from the life by Harriet and Helena Scott; and with descriptions, general and systematic, by A. W. Scott.

2014 marks a 150‐year anniversary since the first edition of this publication was produced.

In celebration, The Kooragang (Ash) Island Project invites four contemporary artists to engage with the narratives around the sister’s lives, the physical publication and the sisters’ botanical illustration practice, the island's natural and cultural significance as well as its pre and post‐colonial histories."

I'm really excited to see what the other artists, all local, come up with for this project.

Helena and Harriet are a fascinating pair and I look forward to getting to know them over the next couple of weeks. Their work was so exceptional it is still used by scientists today, 150 years after it was published. In my mind, Helena and Harriet have a Bronte-like quality because they married later in life (and Helena was widowed early), had no children and devoted their lives to their professional careers at a time when obviously this was unusual. They suffered hardship when their father was bankrupted in the 1860s and had to accept payment for their work (which was apparently unlady-like - it boggles the modern mind).

The Australian Museum has recently had an exhibition of the Scott archive and the weblink is well worth a look.

Of course, Newcastle is the setting of this story and I'll be cruising around town and offering my observations over the next fortnight. It was settled by Europeans in 1797 and has a long history in coal mining, as well as an incredibly beautiful natural setting. I can't wait to get snapping!
Posted by Emma van Leest at 08:28

Emma van Leest
I am a paper-cutting artist based in Melbourne, Australia.